Join us as we remember the past with pride and look to the future with joy and hope!

Bicentennial Events
Our History
Our Windows

St. Paul's Through the Years 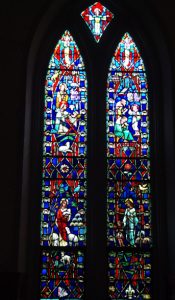 In this window, we have scenes of Jesus’ life. In the upper left, the Nativity scene featuring Mary, Joseph and the infant Jesus. You can see the ox and ass looking on, as the family is in a stable.

To the right, Jesus as a young boy teaching in the temple; those whom he is teaching appeared baffled.

Below the manger scene, Jesus is depicted as the Good Shepherd, holding a lamb in his arms and surrounded by his flock.

To its right, the Blessed Virgin, with a young girl, probably St. Dorothy, who holds an offering of flowers, in imitation of a 14th-century painting by Lorenzetti.

At the bottom of the left window, a gorgeous butterfly, a symbol of transformation and resurrection.

To its right, the white fleur-de-lis, the symbol of purity.

In the very top lancet, Christ risen, with angels attending him in the panels below. 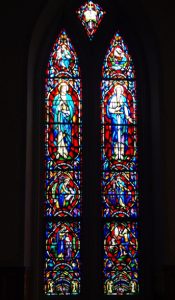 In window number 2, at the top we see the symbol of St. Paul with the slogan “Spiritus Gladius” (“The Sword of the Spirit”).

Below that, in the left panel, we see St. Luke painting a picture of Mary, with the caption, “Blessed art thou among women.”

To its right, “The angel of God whose I am.” The panel is illustrative of an ancient Byzantine tradition in which Luke sent this painting to Theophilus in Antioch. It was later transferred to Constantinople, where it has become perhaps the most famous of all icons.

Below that, on the left, St. Luke the beloved physician. To the right of him, St. Paul, apostle to the Gentiles.

Next down, on the left, Jesus is raising Lazarus and saying, “Trouble not, his live is in him.” To the right of that panel, Jesus is teaching a group of people, saying, “God made the world and all things.”

Again, on the left, a woman being baptized and, to its right, a figure kneeling before Jesus and asking, “Who art thou, Lord?” 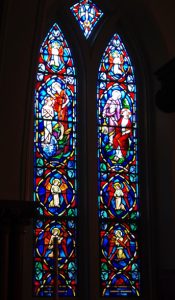 In the lancet at the very top, we see the Holy Spirit, in the form of a dove, descending.

Below the dove, on either side, are angels. The angel on the right is holding the Chi Rho, the Christian monogram, consisting of the intersecting Greek letters X and P, which are the first two letters of ‘Christ’ in Greek.

In the left window, we see Jesus being baptized in the Jordan River by John the Baptist, with the caption depicting God’s statement, “My beloved son.”

To the right of that scene, Jesus is talking with the Pharisee, Nicodemus, saying, “You must be born again.”

Below those scenes are more angels, including one wearing a sash inscribed ‘Agnus Dei” (‘Lamb of God’), and one bearing a cross and the inscription INRI, the initial letters of the Latin inscription written by Pontius Pilate to be placed on the cross of Jesus: “Iesus Nazaremus Rex Iudaeorum” (“Jesus of Nazareth, King of the Jews”). Dedication: “To the glory of God and in loving memory of all Christians heretofore unremembered.” 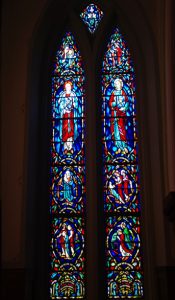 In the fourth window, at the top, the lily.

Below that, on the left, an angel is speaking to Mary, saying “Ecce ancilllia domine” (“Behold the handmaid of the Lord”).

Next down, on the left, Mary the mother of Jesus and, on the right, John the beloved disciple.

Again, on the left, Mary, with a quote from the Magnificat, “My soul doth magnify the Lord. To her right, below John, we see Jesus saying, “Damsel, arise.”

On the bottom left, we see the beloved disciple – after the crucifixion – and the quote, “He took her into his home.” This was in response to Jesus’ request when, at the time of his crucifixion, Jesus introduced John to Mary as her “son,” and to John, he said, “Behold your mother.”

To the right of that scene, an unidentified reference (possibly to the disciples themselves), “They knew not the Scripture.” This window bears a dedication to the Nye family. 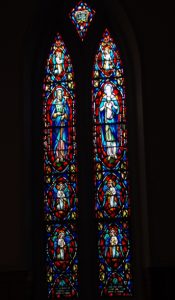 Window number five, at the top, reads “The Gospel of St. Matthew.” The top panels, left and right, depict angels; the one on the left holds an open book.

Next down, on the left, St. Barnabas with the quote, “He was a good man.” To his right, Dorcas, an important woman of the New Testament, mentioned (among other places) in the book of Acts, with the quote “Full of good works.”

This window bears a dedication to Frank G. and Anna K. Uhrig. 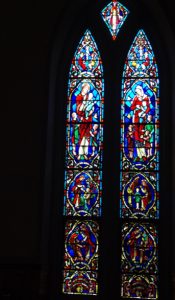 In this window, in the upper lancet, we see Jesus as a shepherd: he is in dazzling raiment, holding a crozier (shepherd’s crook), and is surrounded by sheep.

Below that, on the left, Jesus is with his parents, Mary and Joseph, and we see the caption, “Jesus increased in wisdom and stamina.”

To the right, again the Holy Family, as we follow Jesus in his youth, with the caption, “The child grew and waxed strong in faith.” You may recall that, even as a child, Jesus went to the temple and taught.

Next down, on the left, we see Jesus with children, and the caption, “He took them up in his arms.” We are reminded of Jesus saying, “Suffer the little children to come unto me.”

To his right, a woman shepherding more children, and the continuation of the previous caption, “…and blessed them.”

Next down, on the left, Jesus performing a miracle in curing a woman, as he says, “Woman, I say unto thee, arise.” And, to the right of that scene, we see a mature Jesus with another child, and the caption, “He took a child and set him in the midst of them.”

At the bottom left, Jesus has healed the Roman centurion’s son, and is saying, “Go thy way, Thy son liveth. To the right, Jesus is saying to the woman, “O woman, great is thy faith.”